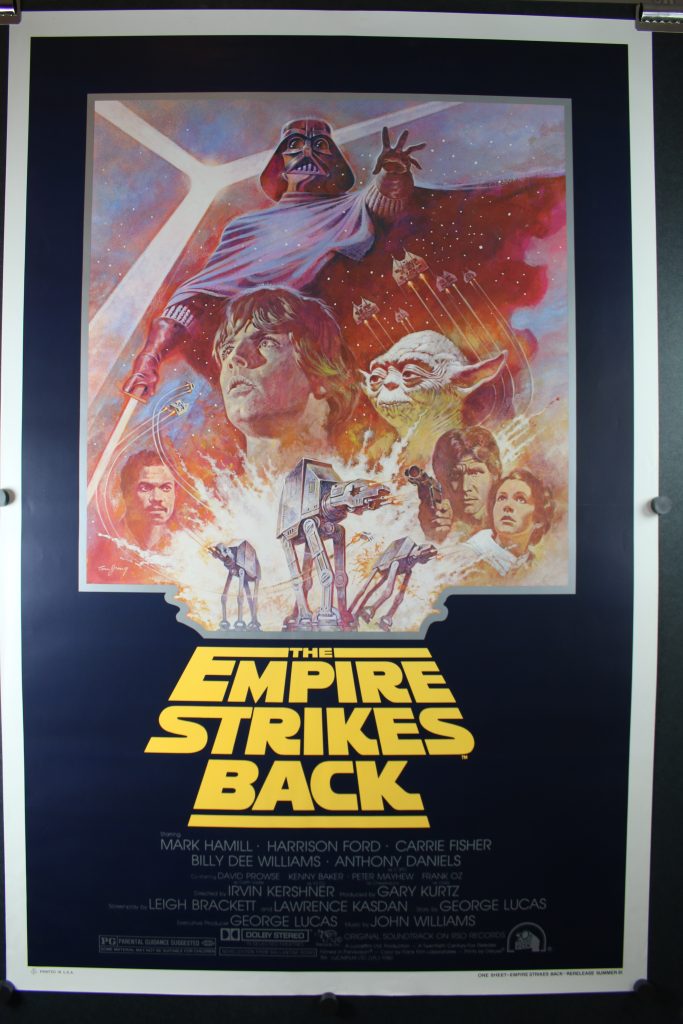 STAR WARS: THE EMPIRE STRIKES BACK, 1980. Original 1981 NSS Re-release 1 Sheet (27 x 41″) is a rolled/unfolded movie theater poster for sale and starring; Mark Hamill, Harrison Ford, Carrie Fisher director Irvin Kershner and written and produced by George Lucas.  This beautiful re-release poster sells frequently through our gallery located in Katy Texas. People often say they are looking for a version featuring all the characters. They veer toward this poster because of that and because we hear over and over again that the artwork on this poster is nice; with the colors reflecting on a style from the early 80s which isnt used any longer in poster art. Also, this version is much more affordable than some of the other original theatrical releases. No matter the reason, this 1981 re-release is a great poster for new collectors, people browsing for their entertainment / game rooms or as an investment. A mint condition rolled poster for a poster pre 1989 is a special situation that doesnt often come around.

This 81 re releases came in two different versions: the national screen service NSS versions and the Studio release versions. Neither version is conclusively recognized as the more valuable version. This is likely because neither is especially rare. In time, which is more sought after should be eventually revealed. This particular movie poster is a NSS release

This particular rolled NSS ESB poster is in near mint to mint condition and does not show any major or minor defects to note. This is a true investment grade piece.