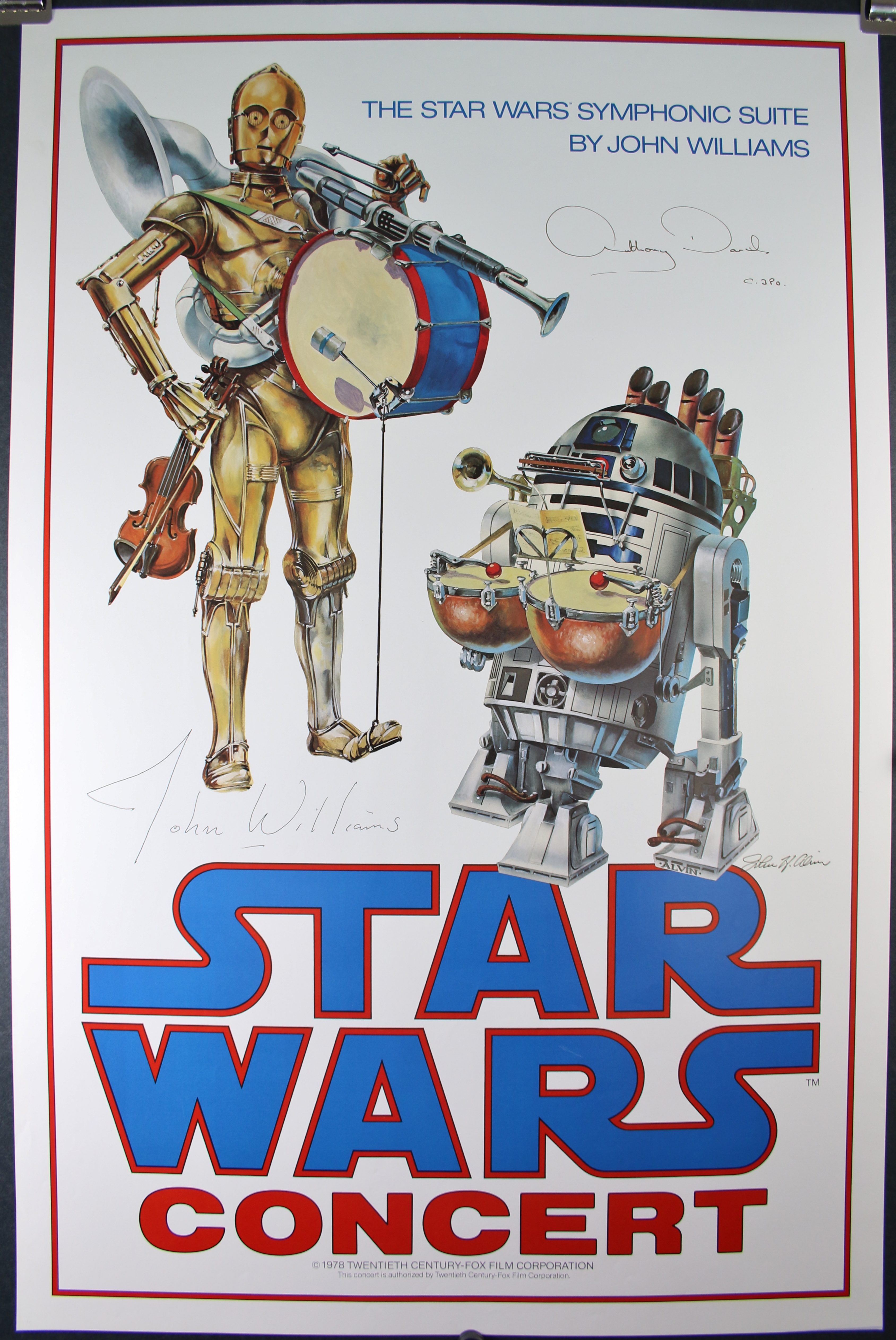 STAR WARS CONCERT, 1978. This is the ultra rare “Concert Poster” measuring (24.25 X 37.15″). Aside from the triple bill, this is the most desirable of all posters for the Star Wars franchise.

According to the Star Wars Poster Book by Stephen Sansweet and Peter Vilmur: this poster was available to purchase for one night only at the Hollywood Bowl premiere of the Star Wars concert series by composer John Williams (whom also signed this poster). This has been falsified because the poster was printed in 1978 and the Bowl took place on November 22nd of 1977 (ref).

The story starts on November 2nd of 1977 where Zubin Mehta conducted John Williams’s mythical musical score for STAR WARS with the Los Angeles philharmonic at the Hollywood Bowl. John Williams needs little introduction with his plethora of awards including five Academy Awards and forty-nine Oscar nominations and dozens of wins; he is decorated as the Academy’s most-nominated living person and the second-most nominated person in the history of the Oscars. However, to most Star War fans conductor Zubin Mehta needs a bit more of an introduction. Mehta began his career in 1962 and garnered tremendous fame in his own right. He was featured on the cover of Time magazine just 6 years after leading the orchestra and earned prestigious positions within the orchestra scene. He was asked to conduct at the Hollywood bowl on November 22nd of 1977 where the Star Wars concert series first debuted.

The posters presence in history is a little ambiguous because it was never actually featured at the Hollywood Bowl in November of 1977, but has been reported as being printed in October of 1978 (ref). The poster was commissioned by art director  Suzy Rice (whom was responsible for the original logo for Star Wars )  to get John Alvin’s (also signed this poster) tremendous talent mobilized to paint this artwork to unify the concert’s tour with a single key illustration (Star Wars poster book). Alvin was the talent behind some of the most sought after artwork for star wars and over 135 other films (Ref.)! Written reports explain that the poster was commisioned after management changed hands just earlier that year around April of 1978 (spring).

These are the known facts and the most widely understood truths. Several question remain: the poster was never released at the Hollywood Bowl which this poster’s design and artwork has clearly been associated with; so why was it ever produced at all if it wasn’t destined for distribution or the public’s eye? How did these posters ever make it to the public and how many are in existence? The Star Wars poster book has rated this poster as a 10, with the highest possible rating based on rarity and desirability, there is no doubt there are answers to these questions which should shed light on the rest of the history of this poster. If you or anyone you know think you may have the answer please <Contact Us> and help us lay these riddles to rest.

This original Star Wars Concert poster is in C10 mint condition and is autographed by John Alvin, John Williams and Anthony Daniels (C.3PO). It is the highest condition graded poster of its kind anywhere on the internet and it is autographed by the artist and composer and character from the poster’s image.

Sorry this poster has been sold

For all our <Star Wars>  posters follow the link!