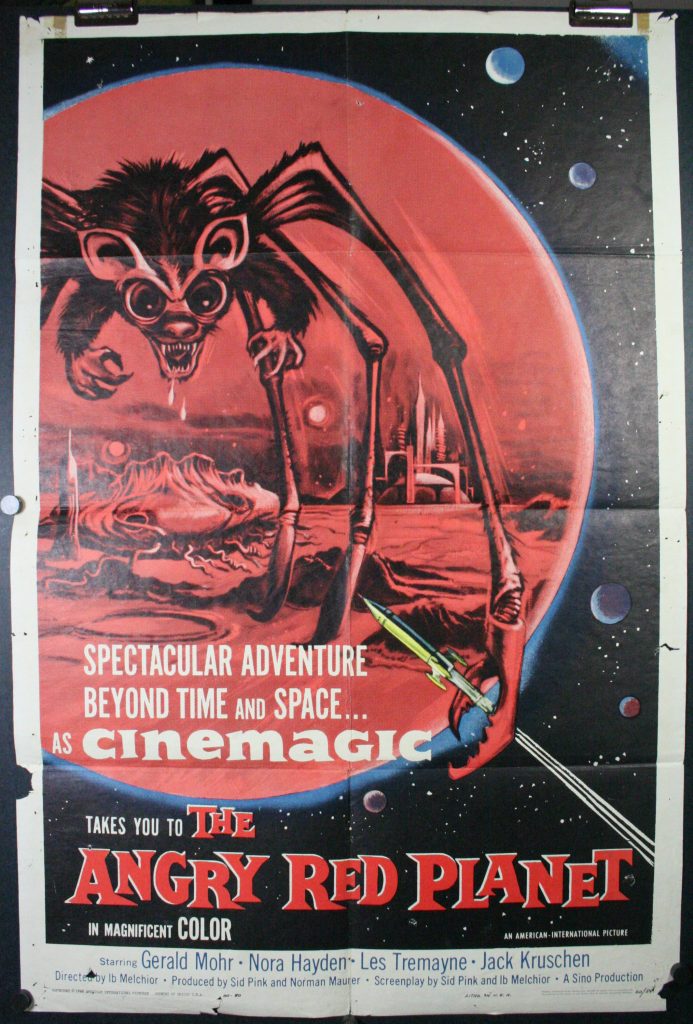 THE ANGRY RED PLANET, 1959. Original Sci-fi 1 sheet  (27 x 41” / 68 x 104 cm) movie theater poster for sale starring; Gerald Mohr, Naura Hayden, Les Tremayne and director writer Ib Melchior. Also known as “Invasion of Mars” Norman Maurer the producer spent over a quarter of this films budget on shooting the mars shots while attempting a technique called cinemagic. Cinemagic was a artistic method that transformed the background of the film on Mars in to art. More specifically, live-action sci-fi footage would be directly turned into hand-drawn animation. This film wasn’t known for using cinemagic successfully though of course and rather butchered the technique with the footage shot on the surface of Mars.

This original sci-fi 1 sheet movie theater poster featuring space travel to Mars and shot using Cinemagic is in good condition. It does however have some major and minor imperfections. Major imperfections include numerous tears scattered along the margins and tape burns on the upper margin. Minor imperfections include numerous pin holes along the margin. Fortunately there is very light wear to the image and the colors are still vibrant and strong. The fold lines show very light wear and there is one hole above the spiders upper leg near the central vertical fold line. This poster is scheduled for linen backing in the 3rd quarter of 2014. It will take a very major transformation after linen backing, so stay tuned!