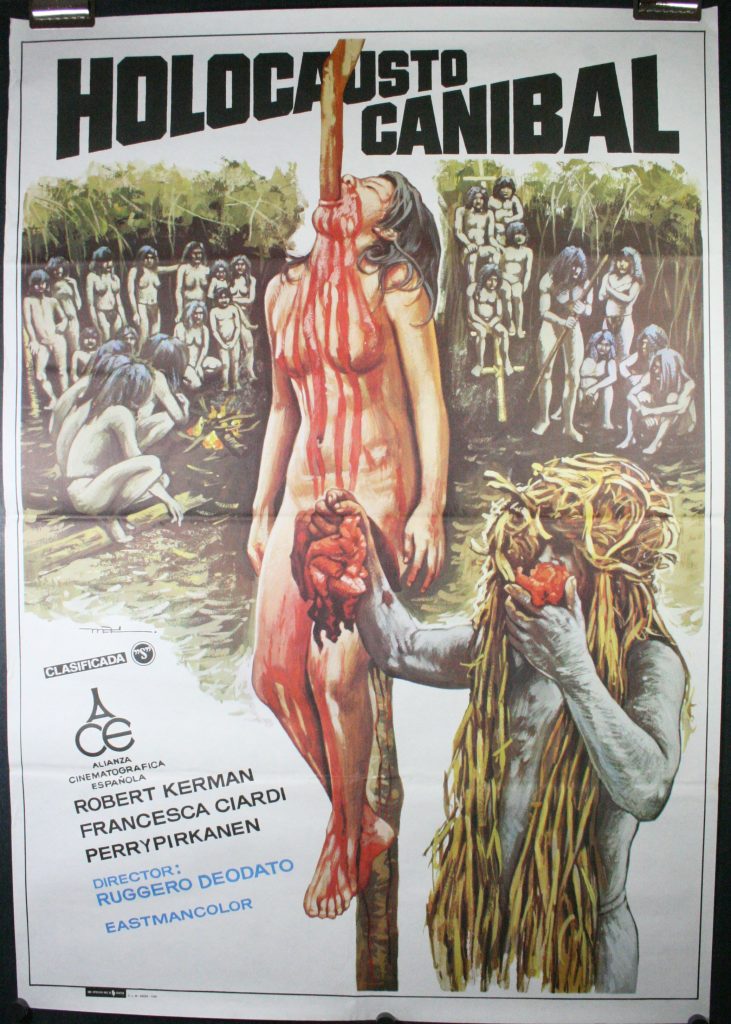 CANNIBAL HOLOCAUST, 1980. Original Ruggero Deodato Grindhouse Horror Spanish 1 Sheet (27 1/2 x 39 1/2″) movie poster for sale, starring; Robert Kerman, Carl Gabriel Yorke, Francesca Ciardi, director Ruggero Deodato and writer Gianfranco Clerici. This controversial film also known as “Holocausto Canibal” was released at a time when directors hadn’t yet fully pushed the limits of western tolerance. The film was set in the Amazon rainforest in Brazil and featured indigenous tribes the Yanomamo and the Shamatari. Reggero Deodato had 7 animals killed during the making of this film. They were brutal killings, used to demonstrate the uncivilized nature of both the indigenous and the westerners invading their home and way of life.

This film became a show case for animal rights activism and following its release, animals were never again killed on camera in this manner. With over 50 countries banning the movie, it changed the film industry.  Numerous Horror and Grindhouse reviews have placed this poster at the top scariest movie ever made or in the top 10. It is an immensely important film to Grindhouse and to Horror and will remain an important part of cinema history forever.

This original Deodato Grindhouse movie poster by artist Macario “Mac” Gomez, is in near mint condition with only minor fold line imprints. The poster does have a minor imperfection which is some light roughling of the upper left margin. Outside of this, the poster is flawless.