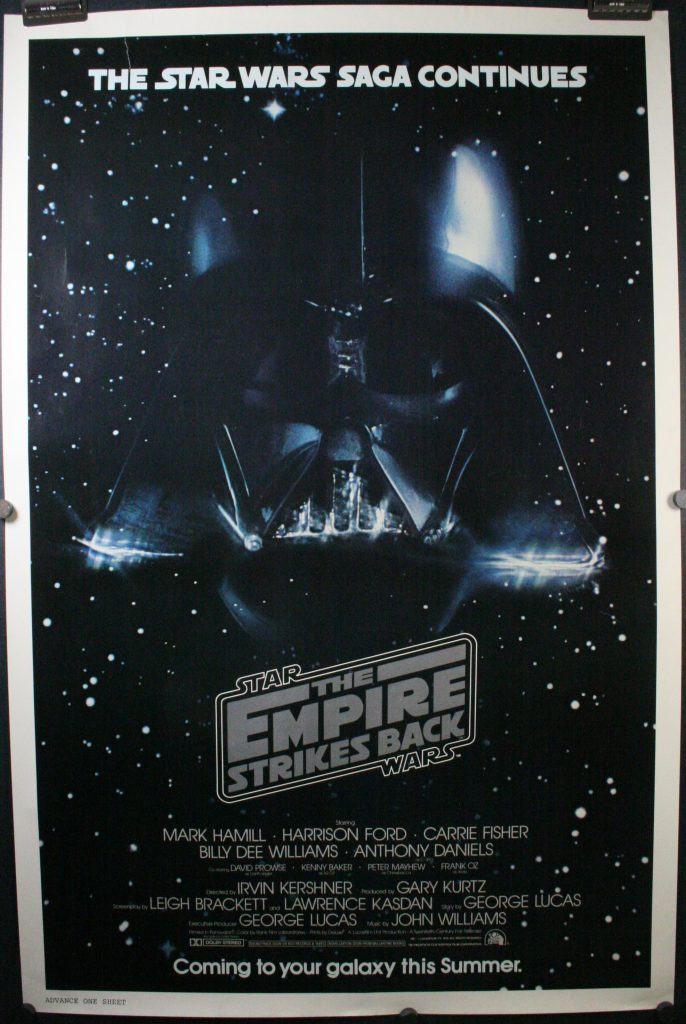 “Coming to your galaxy this Summer.” characterizes the teaser poster for ESB.

The opening scene from “The Force Awakens”; featuring the warn and morphed vader helmet, is eerie when reminiscing on this teaser poster for the height of the Star Wars franchise. This poster represents the Vader fervor that occurred following the Star Wars release in 1977. He had become the most popular character in terms of the public and fan base (Winham & Vilmur, 2009) and that is why Lucas chose the Advance release poster for Empire Strikes back to feature Vader’s infamous helmet in all its GLORY!!

There are two types of original theatrical movie posters for the Empire Strikes back. There is the:

Both versions were printed at the time of the theatrical release of the film, some by the national screen service and some by the studio. Both are original and neither clearly demonstrates more value over the other. Popular auction sites show the collecting market has not differentiated any difference in value. Studio printing started happening sometime in the late 70s. This poster is the Studio release, to see the NSS release <Click Here>.

Click the link to see all our Star Wars posters

This particular studio advance release movie theater poster for Empire Strikes back has one significant imperfection and two minor ones. The significant imperfection is a tear in the upper left corner that is approximately 2″ long. there are two obvious blemishes 1 ding to the left on vader’s brow in the space in the background and the other is just to the bottom right of the helmet. There is another ding there. The tear would utterly vanish if linen backed and wouldnt even need touch up. the dings would vanish with a few dabs of black touch-up ink. At that point this poster would appear perfect!