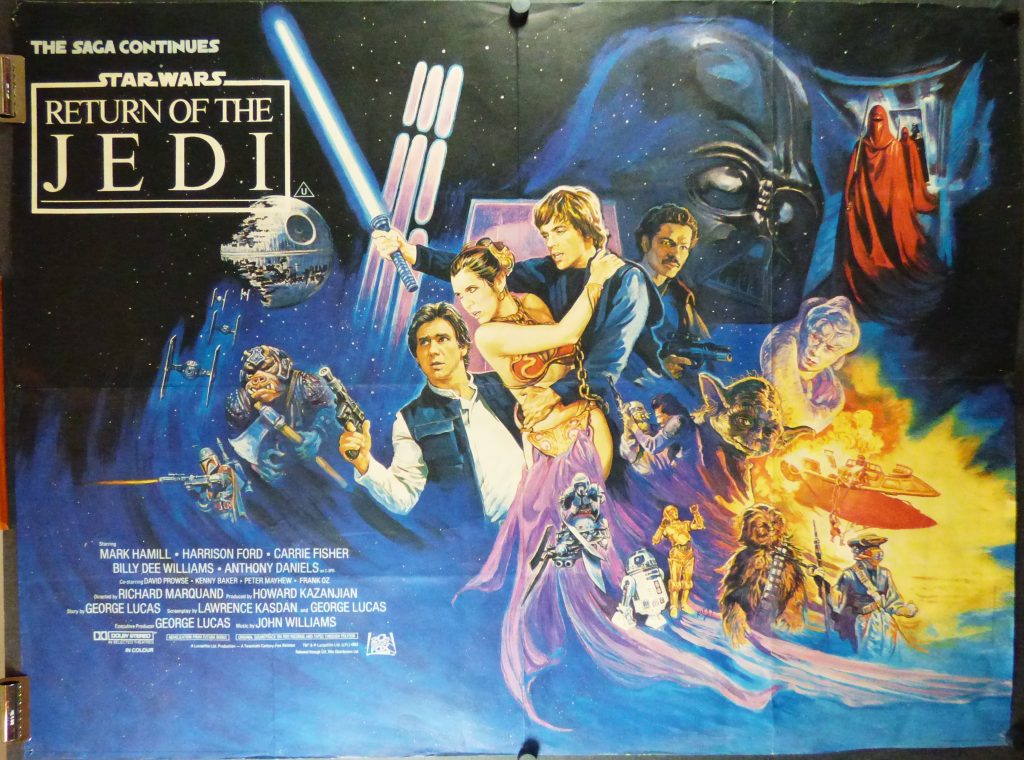 STAR WARS: EPISODE VI – RETURN OF THE JEDI, 1983. Original rolled British Quad (30″ x 40″) “Matte Style” Sci-Fi movie cinema poster for sale, starring Mark Hamill, Harrison Ford, Carrie Fisher, writer / executive producer George Lucas and director Richard Marquand. This beautiful movie poster featured in cinemas through the United Kingdom and England is pretty rare and shows some fantastic artwork that is both delicate, highly creative and honestly in this author’s opinion maybe the best graphics available as a poster released for this film. Star Wars will forever be a hugely important film for western culture and these poster are undoubtedly sound investments. This particular rare British Quad is an excellent example of a fantastic investment piece.

If this is not quite the piece your looking for have a look at a Style A “Lightsaber” 1 sheet, or perhaps the recalled Revenge of the Jedi, or maybe a rolled Half sheet.

Authentication Note: There are two versions of this British Quad, there is a version with the Ewoks directly underneath Han Solo’s body and there is this version without. To see the other version <Click Here>. Noted Star Wars specialists have identified that this version without Ewoks was the first poster released by Lucas film for this film. There are also some printing anomalies to note: some were released 27.5 x 40″ (thought to be made for the London underground) and there was the standard quad printed at 30×40″ which is this one and very unusual to find. This 30 x 40 can be detected based on the printers information at the bottom which is not present in the 27.5″ by 40″. See below figure.

This particular Star Wars: Return of the Jedi British Quad Movie poster that was featured in cinemas every where, is for sale and in very fine condition. There are some minor defects to note; there are pin holes in the corners and the slightest wear along the fold lines.