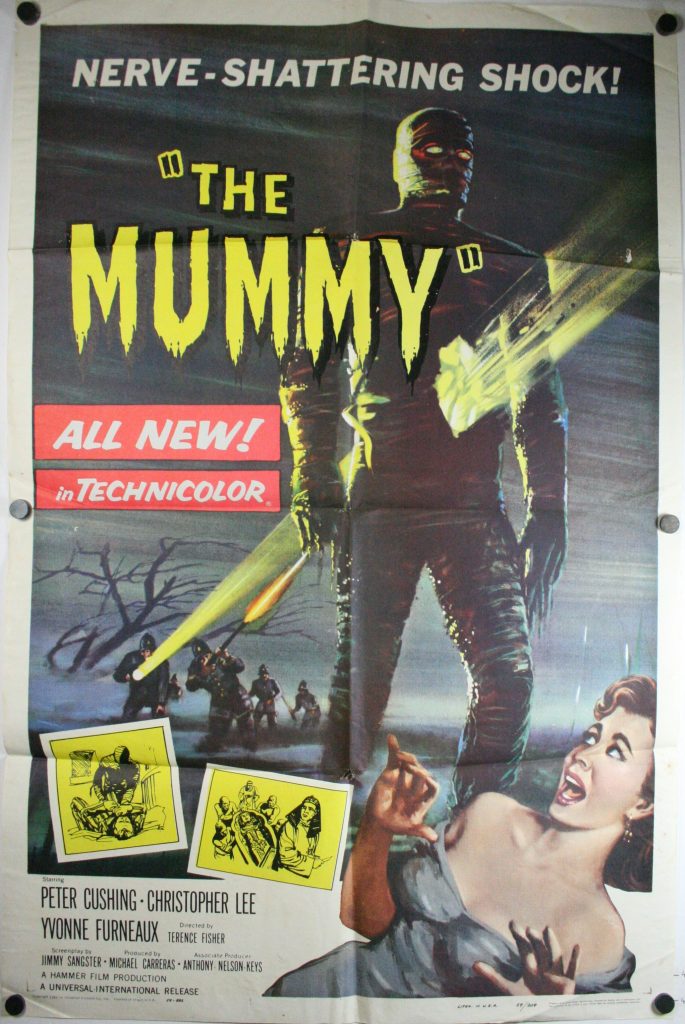 THE MUMMY, 1959. Original Hammer Film production 1 sheet  (27 x 41” / 68 x 104 cm) movie theater poster for sale starring;  Peter Cushing, Christopher Lee, Yvonne Furneaux, director Terence Fisher, writer Jimmy Sangster. The original “Mummy” was released in 1932 and was immense to the world of horror films. The 1932 Mummy poster sold at a Sotheby’s auction in 1997 for $453,500, artwork by Karoly Grosz; and it really set the stage for other monsters of horror, like Frankenstein, and Dracula. This United Kingdomof origin production, is largely considered to be one of the three best movies made by the Hammer Film Production Co. which boasts over 300 productions. That fact, along with the very cool artwork and just that it is an extremely well produced film; plays a significant role in the value of this poster.

This particular original Hammer 1 sheet movie theater poster for sale is in fine condition. It does however show some minor defects that are as follows; there is a gouge in the upper right quadrant (no missing paper), there was a gouge at the cross folds as well (with no missing paper) and the margins and corners show some scattered wear including some folded over paper. Finally the poster was slightly mis-folded at one time in its history. All these defects are minor and will all but vanish following linen backing. Stay tuned for the the linen backing and transformation; it is scheduled for conservation second quarter of 2014!