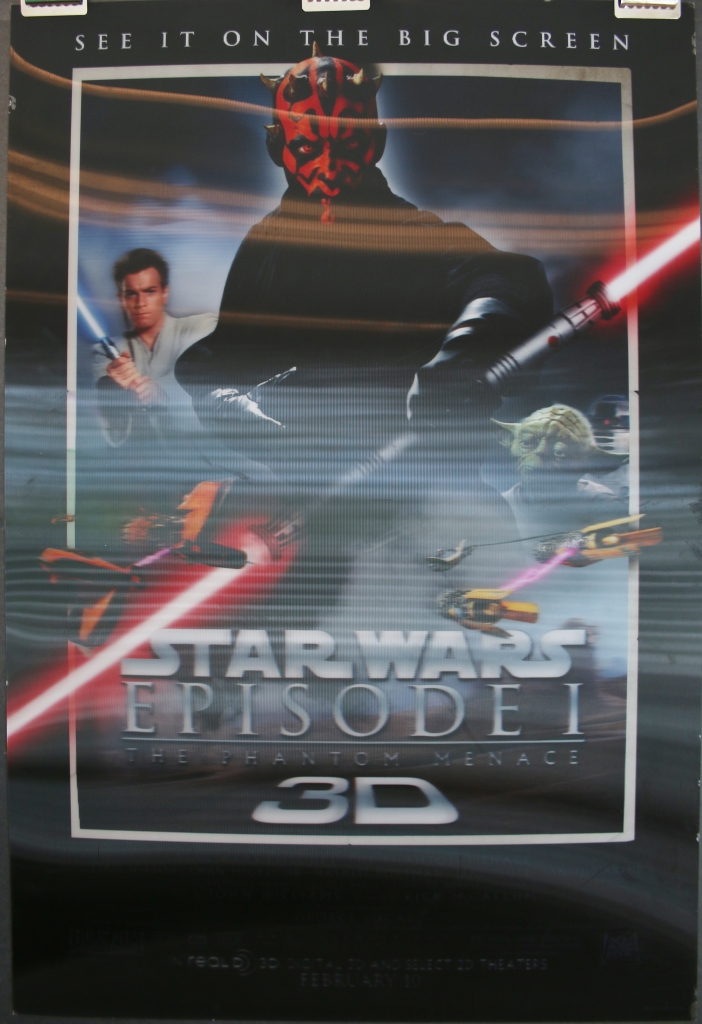 THE PHANTOM MENACE, 1999. Original Advance February 10th 3D 2012 re-release style A Lenticular 1 Sheet (27/40″) theatrical movie poster for sale and Starring Ewan McGregor, Liam Neeson, Natalie Portman director an writer George Lucas. Lucas’s re-invigoration to the Star Wars franchise was met with widespread criticism; however, in its own rights this movie was ahead of its time in what he tried to achieve. 3 Oscar nominations all related to effects and sound capture this statement and bring validation to Lucas’s ambitious vision of a film pushing the boundaries of visual effects. In retrospect, perhaps the movie would have been received differently, if not for the obnoxious comic relief of jar-jar binks. No matter whether you are a lover or a mildly disappointed fan of Star Wars, this film goes into the history books and this poster is a must have for collectors. Lucas intended on remaking all of the star wars films in 3D, but Disney stopped this when the release met with only moderate profit and they decided to shift their focus to the new films, episode 7 to be released at the end of 2015

It has been reported that this 3D lenticular poster had only 100 copies made for the original 3D release in 2012. Lenticular posters look fantastic under any lighting conditions and the image changes based on the angle the viewer looks at the poster. Normally the lenticular process take 12 different images interlaced in special layers like a fabric that generates a complex piece of art. The original is then printed onto paper with a lens material laminated ontop that is specially designed to block 11 of the 12 images from each viewing angle (Learn about Movie Posters).

This particular Lenticular Star Wars the Phantom Menace poster is in fine condition with only minor imperfections along the margins of the poster result from being displayed in the theater. This poster was acquired directly from a theater manager in Texas