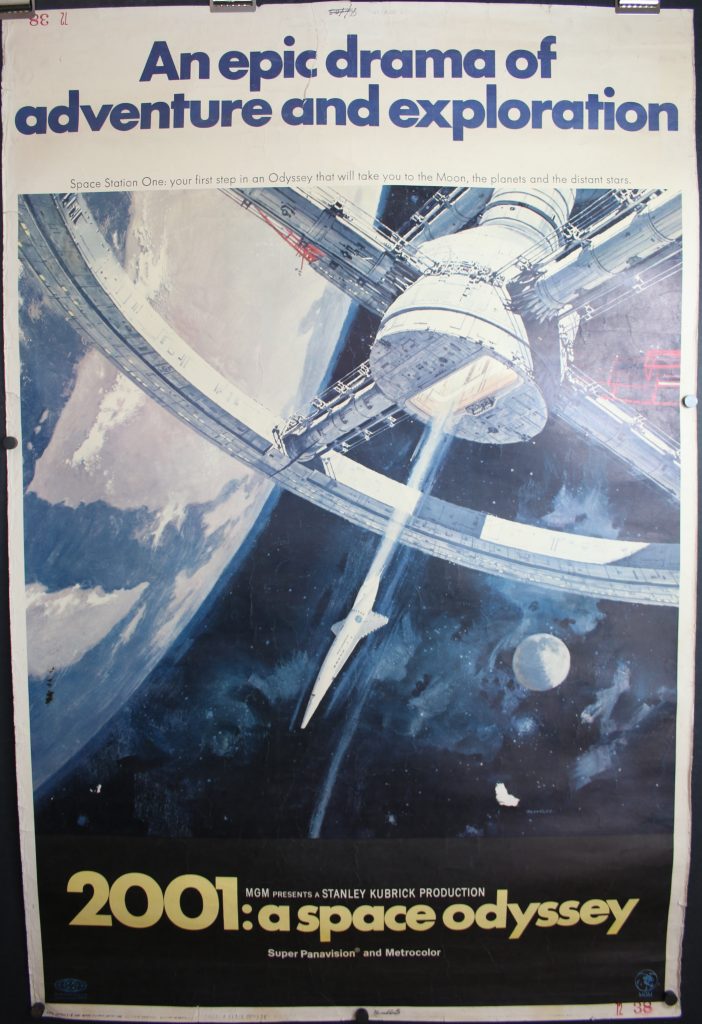 2001: A SPACE ODYSSEY, 1968. Original 40 x 60 (40″ X 60″) “Space Wheel” style science fiction movie theater poster for sale starring; Gary Lockwood, Keir Dullea, William Sylvester, directory Stanley Kubrick and writers Stanley Kubrick and Arthur C. Clarke. This landmark movie made from Arthur C Clarke’s novel was a huge success. This movie was released a year before Armstrong landed on the moon and was certainly part of the build up of excitement amongst Americans. Part of what made this film so memorable was by the opening scene and of course the epic soundtrack, which is referenced and known by nearly all movie goers. This movie won 1 Oscar and 13 other awards and due to its popularity it had several re-releases ( 1974, 1977, 1980 ; this poster is from the original 1968 release.

This original 40×60 has been stamped at the top and bottom with the number 72 38. What these numbers signify is not clear, but there origin came from the studios stamping the poste this way. If anyone has any information about these markings please let us know.

This particular 40 x 60 has some major and minor defects. Major defects include a tear at the top of the poster which was mended by tape on the back. Numerous tape on the back which needs to be removed prior to linen backing and general creasing throughout the poster which is clearly visible in the enlarged photo. In addition there is general edge wear. Luckily none of this damage affects the artwork so this poster will heavily benefit from a general linen backing.