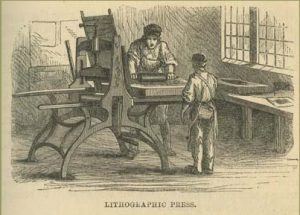 Stone Lithography was invented in 1796 by Bavarian author Alois Senefelder and became very popular in the 19th century. Many movie posters before the 1960s were made with this process, some beautiful examples include The Scarface Mob, Grissley’s Millions, Isle of Destiny etc.  The industry took a blow during WW1 because the quarry in Bavaria where the stones were cut was unfortunately bombed. Largely, Stone lithographers turned to using Zinc plates after WWI. Today, Stone lithography is largely a lost art.

The concept is very interesting and makes posters like these more special and identifiable as works of art, and not simply advertising pieces for Movie Theaters.

A large slab of Limestone is taken and ground down flat with a sandpaper type substance. For a mono tone print, the artist then creates a drawing on tracing paper and then uses a iron oxide powdered paper (similar in affect to carbon paper) and draws on top of stone through the two papers. The artist will use a oil based paint on the stone where he wants to do the painting. The stone is then etched using an acid and through this process the stone absorbs the painting. Once the surface is ready, it is inked and sprayed with water. (The Printers Proof is made here to test the etching and make sure the artist doesn’t want to make any corrections.) Because oil and water don’t mix the etched stone eagerly sucks up the oil based ink that is painted directly on to the stone and repels the ink where wet with water and not etched. After proofing, the artist puts the inked stone under a press with a sheet of paper registered to it and applies 2500 psi to compress the inked stone to the paper. As many as 200 posters can be printed at once using that etched stone. 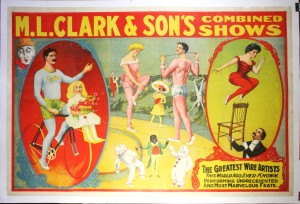 For multi-colored posters some of the most beautiful and complex images will have as many as 8 DIFFERENT STONES!!! All are etched with their own colors. It quickly becomes understandable how one poster can take many months to turn it in to a fine work of art. It’s not too difficult to spot posters that have been printed using this technique as there is a texture in the color when you look at the poster closely. Mostly on posters all you see are a series of dots, if you look at this circus poster below you can see what we mean. This texture is derived from the grains in the slab of limestone.

Occasionally we see Movie Poster Proofs (sometimes denoted A.P.) on the market, and when related to the process we see why they are more rare and typically slightly different than the final poster that makes it to the public.

For more details of the process check out HOW STUFF WORKS

For an example of a 7 stone lithograph look here