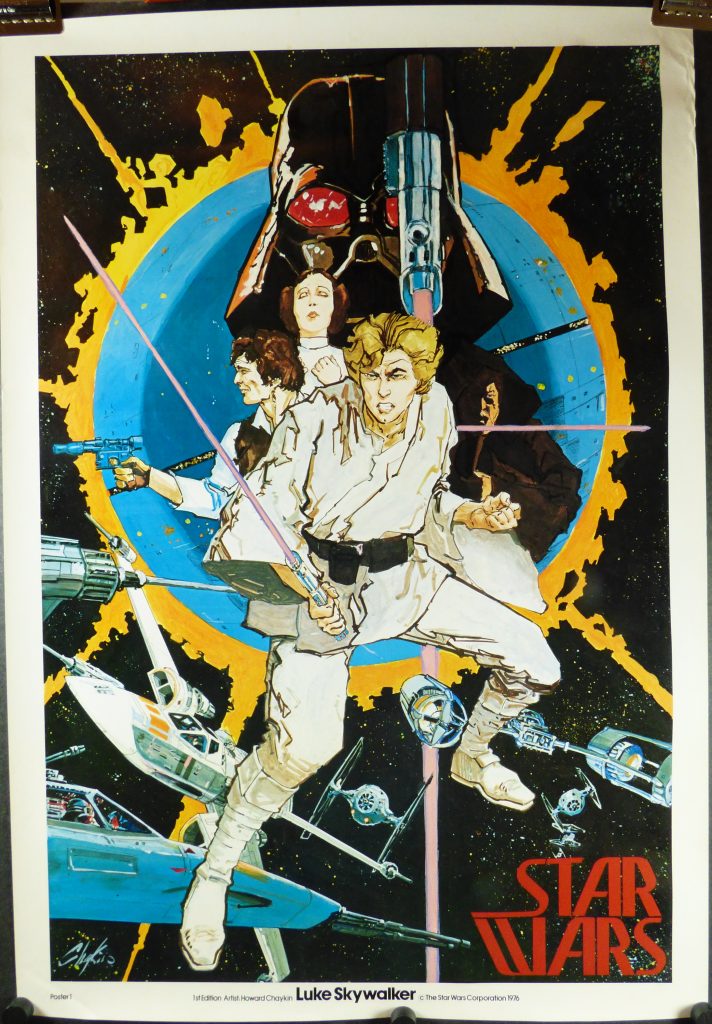 STAR WARS, 1976. Howard Chaykin original Comic Con rolled movie theater poster “#1″ (20 x 29”) for sale and starring Mark Hamill, Harrison Ford, Carrie Fisher, Alec Guinness, Peter Cushing, and director / writer George Lucas. This poster is largely considered to be one of the most collectible posters of all the Star Wars posters made. It is actually not a theatrical movie poster, but an early effort by 20th century fox to drum up excitement for Star Wars Episode IV. Their first task was to contact Howard Chaykin and contract him to illustrate a serial comic book to hype up the upcoming movie.  After all the contracting was finalized about the original comic book series this Star Wars poster #1 was painted and 1,000 posters were printed and released advertising the upcoming Star Wars movie that was destined to reach theaters in 1977. It was debuted for the first time at the San Diego comic con in California and was for sale to comic book enthusiasts for $1.75.

There are numerous fakes, forgeries, replicas and bootlegs on the market for this poster; written here is a summary of how to authenticate taken from a superbly written article by the fellows at movieposterauthenticating.com. In summary there are 6 main methods for authentication:

The size discrepancy is easy to spot. Fakes are observed as 27 x 40 inches, 15.75×23.5 and any other size that isn’t within a quarter of an inch of the 22 x 29 inch known originals. However, size alone is not enough to determine authenticity, as there are fakes with identical poster sizes. A  fake Star Wars Chaykin comic con poster will have deeper colors than the original. The halo around the death star is deep orange in the fake and the black of outer space cuts out many of the stars that normally show. The missing copyright symbol on the bottom margin of the forgery is an excellent indicator aswell. The paper weight in the fake is certainly heavier than the original and text font along the bottom margin of the original is different if closely compared to a forgery.

This Star Wars movie poster #1 also known as “The Chaykin” from the San Diego comic con is in near mint condition. It does show one minor imperfections. The upper right corner got crinkled slightly but will smooth out during linen backing and remain a near mint investment grade condition rolled Chaykin Star Wars poster #1!

For all our <Star Wars>  posters follow the link!