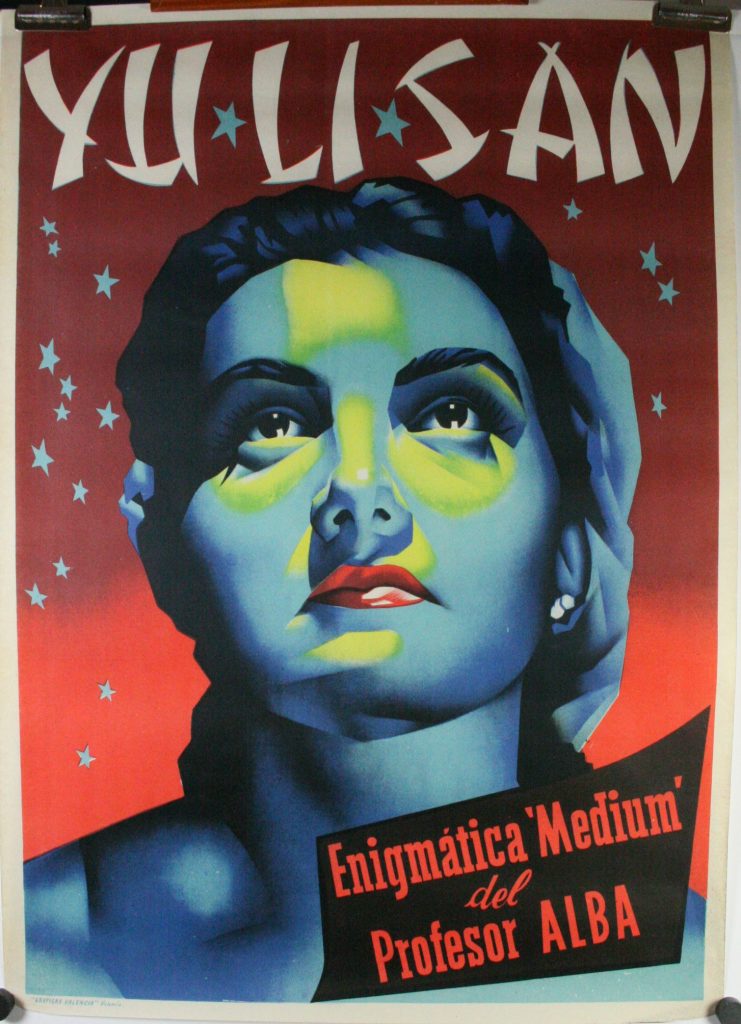 YU-LI-SAN, 1959. This original stone lithograph magic poster printed by “Graficas Valencia”, Valencia measures (20 x 27″) and is for sale. Yu-Li-San was a Spanish female magician and mentalist specializing in a spiritism act (Spiritism first came about it the 19th century and was coined by Allan Kardec. It identifies phenomena considered caused by incorporeal intelligence the spirits.) during the 1950’s with the younger “Profesor Alba”. She called herself as “Yu-Li-San The Enigmatic Medium”.

The original Profesor Alba, Manolo Alba (1894 – 1950), was a Spanish magician in the 1930s, but this poster of Yu-Li-San is a stone lithograph from 1959.  Professor Alba towards the end of his career toured with Yu-Li-San. He was a magician, hypnotist and psychic. He actually came from a family of magicians; his father Manolo Alba was an inspiration, causing him to succeed his father’s show following his death in 1950. Following this, the younger Alba took over the successful show, and toured with it until his own death seventeen years later. This art deco style poster is often paired with another beautiful magic poster featuring Profesor Alba follow the link to see it.

This particular original spanish magic poster featuring Profesor Alba and the Enigmatic Medium Yu-Li-San is in near mint condition and does not exhibit any major or minor imperfections. There is a light and even patina covering this beautiful art deco style poster. Because the paper itself is thin on these posters we recommend having it linen backed to make sure it keeps its investment grade condition grading and doesn’t get damaged