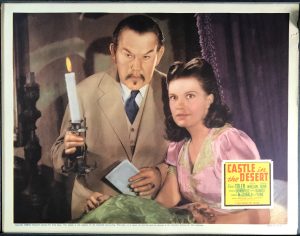 Charlie Chan played by Sidney Toler in Castle of the Desert

The Charlie Chan movies were a big draw at the movie theaters during the 1930’s and 1940’s and were based on a fictional Chinese detective created by American novelist Earl Derr Biggers (1884 – 1933) in 1925. Biggers went on to write a total of 6 novels and developed his protagonist into a benevolent and philosophical sleuth with a comical twist and a knack for humorous “one-liners”. 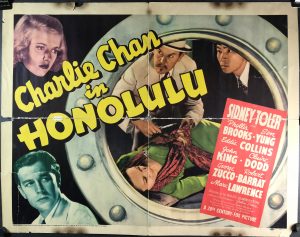 The first of the series was  Charlie Chan in Honolulu, 1939

While there is no doubt that Oland developed the persona of the screen character for Twentieth Century Fox and brought Charlie Chan into the spotlight, Toland was also well received. In Biggers original novel Charlie Chan had a large family of 12 children and his two elder sons appeared in the movies for comic relief as neither inherited their father’s talent for solving mysteries.

All the movies tend to follow the same pattern with a shady character introduced to draw suspicion to all involved except Chan. Chan’s son (Number One son played by Keye Luke in Oland’s movies and by Sen Yung or Number 2 son in Toler’s) is always saying or doing the wrong thing at the wrong time and usually sets up Chan’s next philosophical saying, no doubt inspired by the Chinese philosopher Confucius.

Charlie Chan in The Secret Service. 1943

Then there are the dim-witted police who are always on the wrong track and creating another foil for Chan’s “Confucius” like whimsical statements. Last but by no means least, Mantan Moreland plays handyman and chauffeur and can always be trusted to add yet more comedic relief to this unique Hollywood franchise. 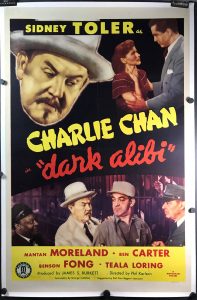 We recently acquired an interesting set of Charlie Chan movie posters and lobby cards from the tenure of Sidney Toland which are now listed for sale on our website. His complete filmography is listed here with highlighted links to each of the items for sale. 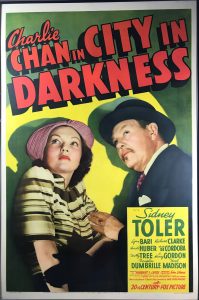 1940 Charlie Chan at the Wax Museum

1944 Charlie Chan in the Chinese Cat

For a comprehensive reference and history to all of the Charlie Chan phenomenon this site is well worth a visit.